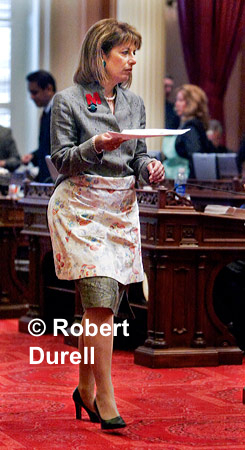 SERVING THE PUBLIC --- Frequently, legislators would abandon their typical business suit attire to make a point - one of the few visible manifestations of their stands on issues. On this day, senators donned aprons to protest a local minister's comment that it is sinful for a woman with children at home to serve in the Senate or Assembly. Jackie Speier, a mother of two -- who was then a state senator and now serves as a congresswoman from San Francisco -- was one of many who wore an apron in protest. May 24, 2004