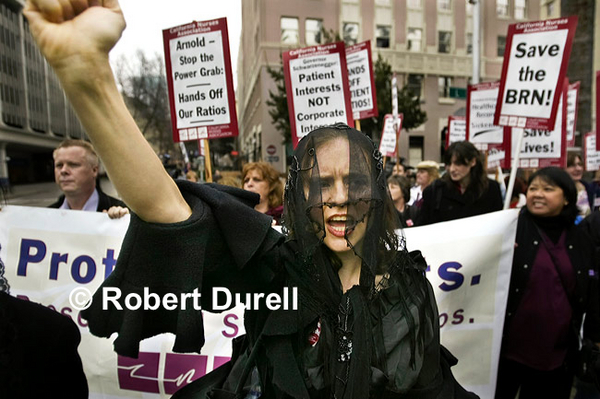 MOURNING CUTS --- Even on the slowest of news days, I could almost always count on at least one protest on the Capitol grounds. On this cold day, I watched for almost 15 minutes as sign-carrying protesters filed by me on L Street, then onto the grounds. I had only shot a couple of frames when I saw this woman in black veil - the traditional mark of a widow in Mexico. Nurses were protesting a possible increase in the permissible nurse-to-patient staffing levels in hospitals. She was shouting louder than anyone else and suddenly raised her fist defiantly and I raised my camera above my head. The message was clear and dramatic: fewer nurses would imperil patients. This remains one of my favorite protest photos. January 18, 2005